Well its been a hot muggy July so far.... though we have gotten some stuff done. We discovered a tri-city yard waste drop off site and loaded up the SUV with the extra limbs lost during one of the last rain storms. Bob used the chain saw to get them into manageable lengths! But still too heavy for our garbage pick up.
I looked around while we emptied the SUV and saw pieces of tree trunks that had been dropped off...some were 3 feet or so in diameter... how on earth did they manage to get them to the drop-off site!!???

We were invited out to Harper's home for an Independence dinner! I was to bring tomatoes with basil and fresh mozzarella cheese with a drizzle of olive oil and balsamic vinegar.... small (tiny) potatoes, fresh green beans, pickled beets and zucchini. Great... was all set! But the number of invitees seemed to grow daily. So I added a little of this and a little of that. My daughter bought more steaks and made two desserts and added more beverages. Someone brought fresh corn and hot dogs for the kids! Food was great... the company was too.... the rain, not so much!!

We were all set...some to sit inside... some on the deck..... and then the rain started. My son-in-law grilled in the rain.... smokers took refuge where ever ....people got WET!!  Harper's home town got 5 inches of rain...new "rivers" ran down between houses... storm drains were full.... 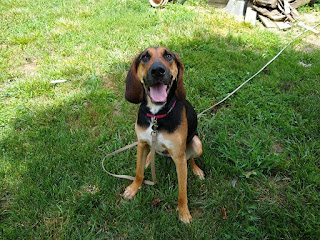 Harper the day before the Independence Day rain. The city has been repairing a storm drain and had to remove the chain link fence. Harper has been very adept at climbing the temporary fence and so has to be tied up for now when she is in her backyard.


BTW Harper hates fireworks and gets very anxious with the noise. She was better when there were lots of people!!
Posted by Bettina Groh at 8:28 AM

Too bad about the rain on your picnic, seriously. I think holidays should be perfect.