Bob woke me up early this morning( 6am) to the wail of tornado sirens!! We both grabbed phones ,glasses, slippers and bathrobes and headed downstairs to the basement.... sirens going off continuously.  It was also raining heavily and the wind blowing ( according to the weatherperson after it was all over) at 80 miles per hour.
I looked out a window by the front door and could not see across the street.
We hunkered down in the basement until the sirens stopped and the phone signaled an all clear. On the way back to bed we checked the local television station's radar map... lots of red and warnings all over.
Finally went back to bed and dozed for awhile.... not a great way to start the day

No damage in our yard other than tipped over plants. Two neighbors had their wooden fences blown down and one had a tree split and half down.   No electricity down here but lots of outages all over Kansas City.
Posted by Bettina Groh at 8:01 AM No comments:

Nothing new going on here. The weather has been mostly hot and sunny though we did have some rain during the night and later in the day Friday. So I didn't have to water the plants.  We just putter around with keep busy projects  and READING.

My younger daughter ( teacher) is working towards her Ed. Specialist degree ( I think)... taking two classes the first part of the summer and a second one the second half. All online. Her degree will be in "gifted education". I listened to her idea for a class "project" the other day... high school gifted curriculum.

My other daughter is the development director for a non-profit. The non-profit's usual way of  fund raising has been cancelled due to the virus and my daughter has been trying to find new ways... lots of grant writing for one thing. The lack of funds has been exacerbated but the increasing needs in the non-profit's clientele.

The virus stats keep on going up around here so we are left with an unsettled future....  Our family is careful especially Bob and I but the younger ones  have jobs etc and have to be out and about.

too early... way too early

This morning I awoke at 6 am to my neighbor's crashing and banging!! He and his family own a trash pick up business and he was throwing around and loading into his pickup truck the trash bins his clients fill for pick up. Sigh... couldn't he have waited till 7 am or later??

My plants definitely needed water... some looked really limp. We have had sun and temps  from the low to mid 80's with a day or two here and there of 90's.
Our deck used to be shaded for most of the day... but when the gum tree had to come down last fall ( it was rotten) the shade was gone for most of the day. Oh well... maybe I can get my husband to bring down a large umbrella from the attic.

The online show went well. I didn't sell out... but maybe next time, which will be in August.

The "family" will be "zooming" this evening..... Boston, Chicago and Missouri. We tried , unsuccessfully, to convince others in South Carolina and Rochester, NY to join us.
The zoom went well... some couldn't be there but the rest of us enjoyed it and will do it again!

I spent most of yesterday hovering over my computer so that when something sold I could change things on my website to alert other lookers... the rest of the time I spent boxing things and getting them ready for a trip to the Post Office!!
Yes... it was a good sales day and the show is still open until Monday night!
My "end of the driveway" mailbox is too small for all those packages so after lunch today we drove off to the PO to drop them off. I use USPS' "click and ship" and can pay for and print off shipping labels. This makes things so easy and no standing on line!!
Then of to Michael's Craft Store ...Bob saw an advertisement for lidded storage boxes and I needed perle cotton for bear noses. We wore our masks and were careful... first time we had been to a craft store since the beginning of the lock down.
After this we headed for a new fresh veggies stand I had seen on Facebook. Two very nice teenagers were manning it... I wore a mask and signs told me where to enter and exit.... bought cucumbers and tomatoes . It's still early season wise and was told they would be having more and to watch the Facebook page.
Then  we went on an old-fashioned road trip... not far... but we hadn't done it forever. Some things never change and some things definitely had! Nice change from being stuck in the house... nice and sunny and the temps were a little lower - low 80's. 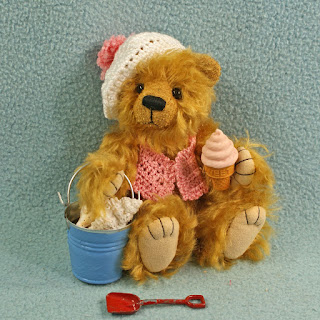 Here's one that "left"...
Almost forgot... made another of Joanne's ( Cup on the Bus)  Crostatas ... a strawberry one this time. Yummy

As I got ready for another walk around the neighborhood I heard all this banging!  I looked around and finally discovered that my neighbors to the back and left are having a new roof installed. Since the house originally had wood shakes  and then asphalt shingles, both of these had to be removed and plywood installed.
So all this has been going on all day. It looks like they are about half done . The weatherperson on TV says it will start raining early tomorrow so the roofers will probably work until dark.

My walk was tiring... again.

I came across a squished and dried toad on the road ... a bigger one then I had ever seen outside of a zoo! It measured more than 9 inches long!!

Tomorrow is my next online bear and friends show.... I will keep checking my emails to see if anything sold !

Tonight's dinner is not exciting to say the least ... egg and black olive salad sandwiches, apple sauce and what's left of the potato chips  ( from the potato chip omelet I made a few days ago)  Then apple tartlets for afters. I didn't feel like cooking and the tartlets are frozen and easily baked!!

not a do nothing today

I have become bored with the laps around my dining room, living room, family room and kitchen! So I decided to go out early - while the temps were in the low 70's - for a walk. My neighborhood was dead as a door nail... no cars parked ... almost no people. I saw two .. one going on a "run" and one heading out to his car. probably to go to work.

So now I am whipped... my stamina is gone. Guess the laps were not a good enough replacement. I am glad I didn't wait till the temps are in the the 90's later this afternoon.

Today was pretty much a do nothing day.. read a lot!! Then the Kindle had a hiccup... telling me any book I wanted to read had been removed from the Kindle. Couldn't figure out how to reboot it so just decided to charge the battery and wait for Bob to figure it out.  Which he did... hooray.

I did make a recipe Bob had wanted to try.... potato chip omelet. It called for 12 eggs and 6 oz. of potato chips. Way too much for two of us so I cut the recipe in half. Failure... not in making it but the end result. Super bland.. threw the recipe out ... not a keeper. Luckily I also made a nice green salad!

It's still super warm ... over 90 degrees. Probably part of the reason why today was do nothing. It looks like it will be the same till the end of the week .. plants will need watering tomorrow.